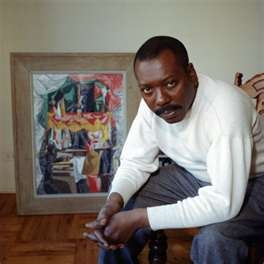 Jacob Lawrence is among the best-known twentieth century African American painters, a distinction shared with Romare Bearden. Lawrence was only in his 20’s when his “Migration Series” made him nationally famous. The series of paintings was featured in a 1941 issue of Fortune Magazine. The series depicted the epic Great Migration of blacks to the North. Born in 1917 in Atlantic City, New Jersey, Lawrence was thirteen when he moved with his mother, sister and brother to New York City. His mother enrolled him in classes at an arts and crafts settlement house in Harlem, in an effort to keep him busy. The young Lawrence often drew patterns with crayons. Although much of his work copied his mother’s carpets, an art teacher there noted great potential in Lawrence. After dropping out of high school at sixteen, Lawrence worked in a laundry and a printing plant. More importantly, he attended classes at the Harlem Art Workshop, taught by his mentor, the African American artist Charles Alston. Lawrence married Gwendolyn Knight after receiving a job with the Works Progress Administration. In addition to getting paid, he was able to study and work with such notable Harlem Renaissance artists as Alston and Henry Bannarn in the Alston-Bannarn workshop. During the Second World War, he enlisted in the United States Navy. In 1970 Lawrence settled in Seattle, Washington and became an art professor at the University of Washington. Some of his works are now displayed in the Paul G. Allen Center for Computer Science & Engineering and in Meany Hall for the Performing Arts. The piece in the main lobby of Meany Hall, entitled “Theatre”, was commissioned by the University for the hall in 1985. Throughout his lengthy artistic career, Lawrence concentrated on depicting the history and struggles of African Americans. Lawrence’s work often portrayed important periods in African-American history. The artist was twenty-one years old when his series of paintings of the Haitian general Toussaint L’Ouverture was shown in an exhibit of African American artists at the Baltimore Museum of Art. This impressive work was followed by a series of paintings of the lives of Frederick Douglass and Harriet Tubman, as well as a series of pieces about the abolitionist John Brown. Lawrence was only twenty-three when he completed the sixty-panel set of narrative paintings entitled Migration of the Negro. The series, a moving portrayal of the migration of hundreds of thousands of African Americans from the rural South to the North after World War I, was shown in New York, and brought him national recognition. In the 1940s Lawrence was given his first major solo exhibition at the Museum of Modern Art in New York City, and became the most celebrated African American painter in the country. He taught at several schools, and continued to paint until a few weeks before his death in June 2000 at the age of eighty-two. His last public work, the mosaic mural New York in Transit, was installed in October 2001 in the Times Square subway station in New York City. Lawrence was honored as an artist, teacher, and humanitarian when the NAACP awarded him the Spingarn Medal in 1970 for his outstanding achievements. In 1974 the Whitney Museum of American Art in New York held a major retrospective of his work, and in 1983 he was elected to the American Academy of Arts and Letters. In 1998 he received Washington State’s highest honor, The Washington Medal of Merit. He was awarded the US National Medal of the Arts in 1990. His work is in the permanent collections of numerous museums, including the Metropolitan Museum of Art, the Museum of Modern Art, the Whitney Museum, and the Brooklyn Museum.In May of 2007, the White House Historical Association (via the White House Acquisition Trust) purchased Lawrence’s The Builders (1947) for $2.5 million at auction. The painting now hangs in the White House Green Room. Jacob Lawrence died June 9, 2000 at the age of 82 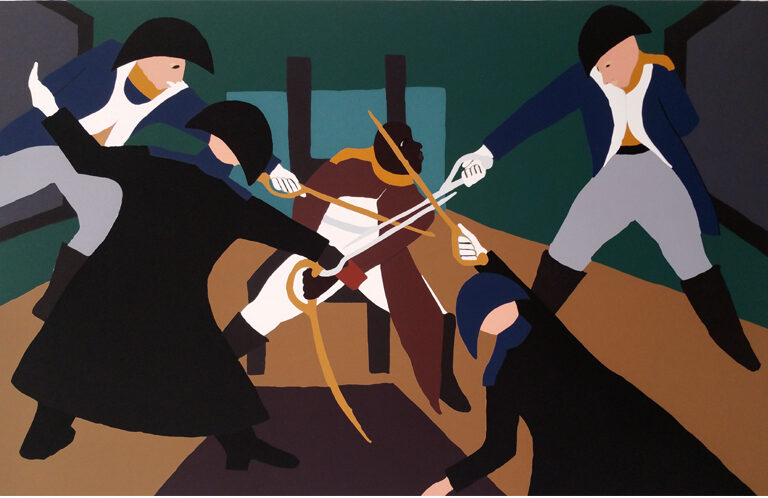 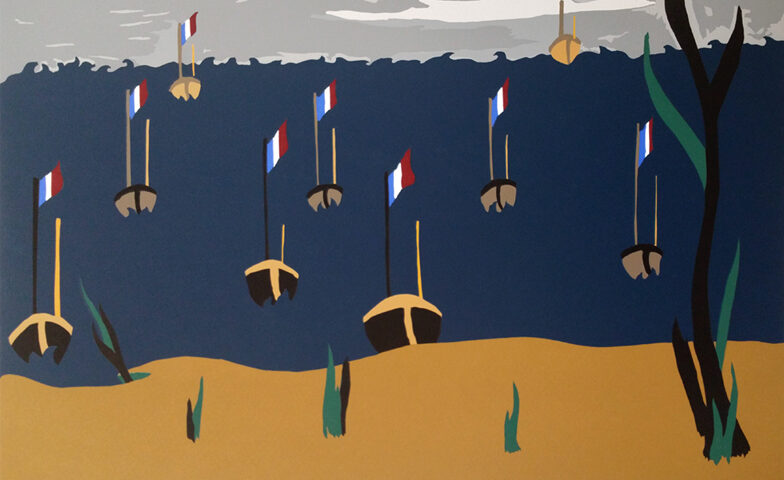 Revolt on the Amistad (Call For Price) 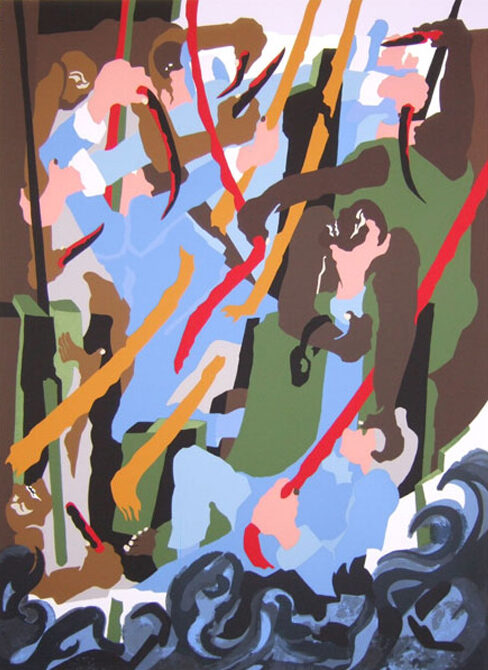 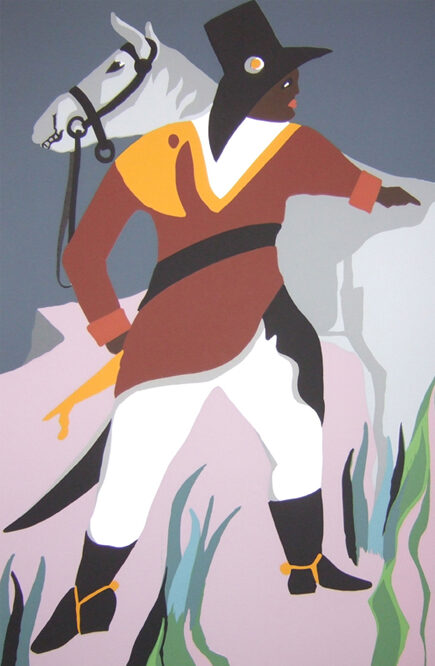 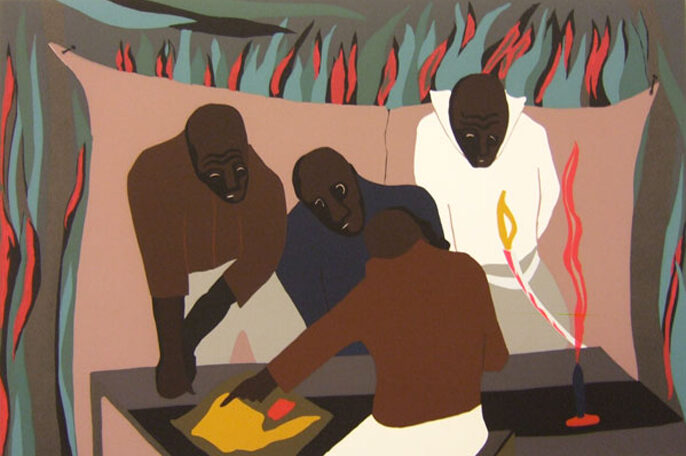 The Burning (Call for price) 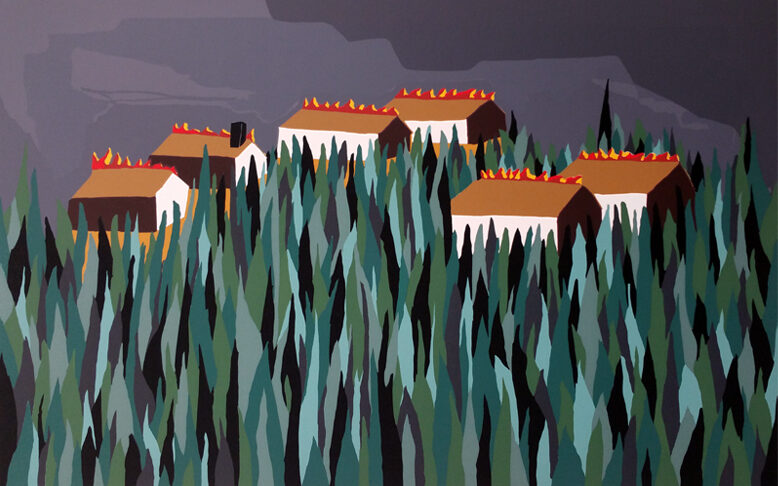 The Capture (Call for price) 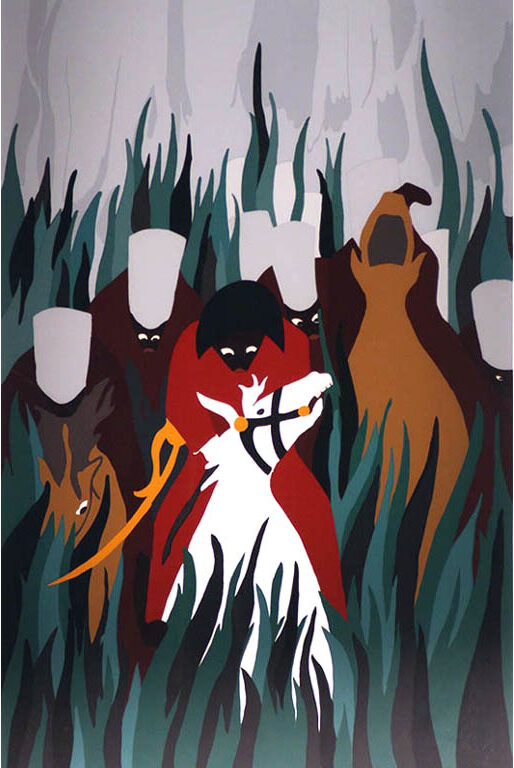 The Coachman (Call For Price) 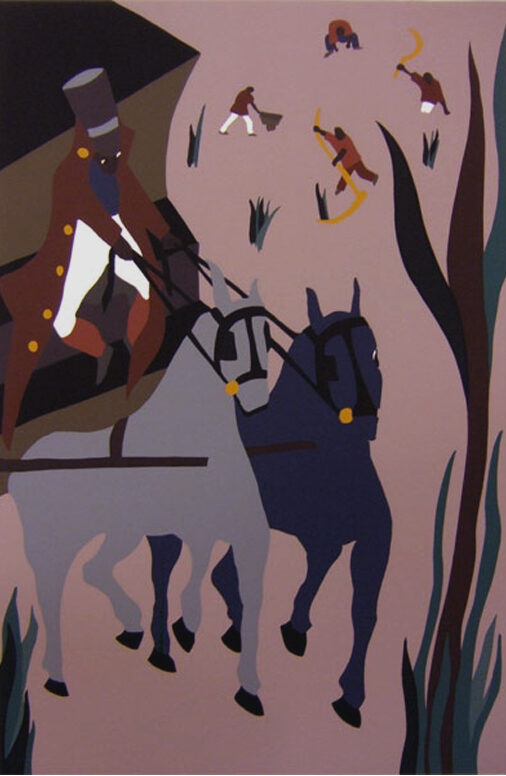 The March (Call for price) 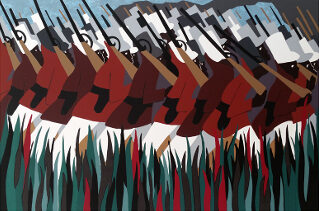 The Opener (Call For Price) 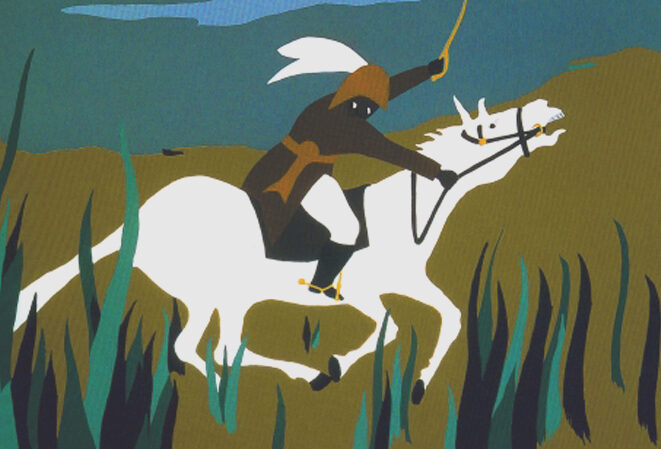 To Preserve Their Freedom (Call for price) 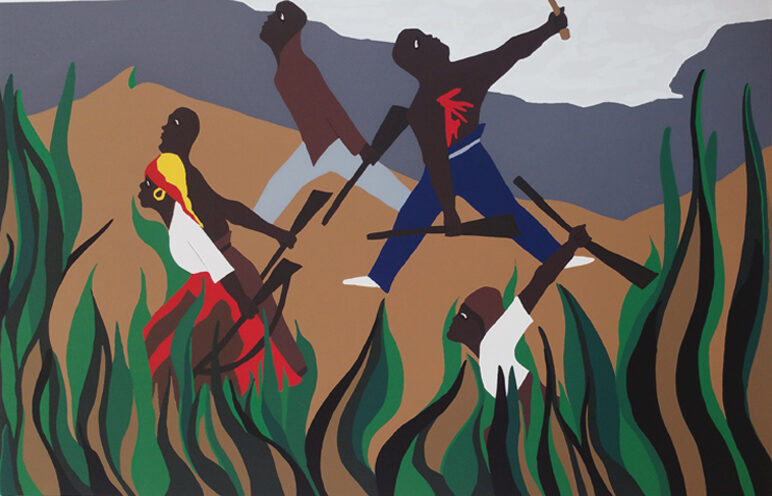 Toussaint at Ennery (Call for price) 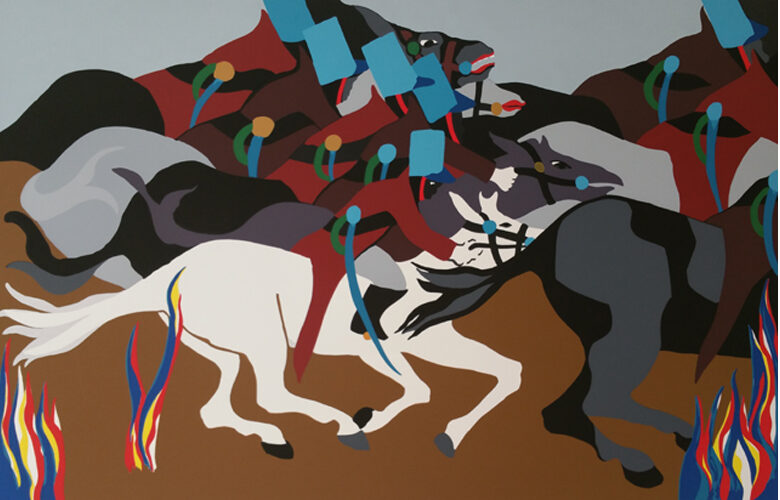